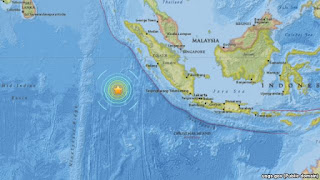 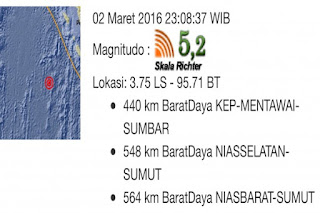 Indonesia issued a tsunami warning on Wednesday (2/3), after a huge earthquake rocked the area off the west coast of Sumatra.

The Meteorology, Climatology and Geophysics (BMKG) Indonesia, said the warning was issued to West Sumatra, North Sumatra and Aceh after the earthquake measuring 7.9 Richter scale was detected.

According to the United States Gelogi Survey (USGS), the epicenter was in the sea at a depth of 10 kilometers and about 808 kilometers southwest of Padang.

There are no reports of damage and casualties. However, the more shallow an earthquake occurs, the greater the damage that may be caused. USGS initially set the quake measured magnitude 8.2 but later lowered it to 8.1 and finally 7.9 SR SR.

Composed of thousands of islands, Indonesia's most active earthquake belt circled in the world, the Pacific Rim of Fire (Pacific Ring of Fire), as well as the most active earthquake belt dibelit number two in the world, Belt Alpide. This condition is exacerbated by the collision of three continental plates, the Indo-Australian of the south, Eurasia from the north, and the Pacific from the east. [Ab / as]
Newer Post Older Post Home